Note: For a few days we are testing this news format. Note that if you make the client fullscreen, there is a tiny 3 pixel wide scrollbar on the right. Pagedown works as well. We will go back to normal soon.

Hooray! A new dev diary is out!

This is the first diary after the newshub has been released! As mentioned previously the diaries have fulfilled their purpose since the changes to the news page, and so we stepped back a little to see what would happen This diary is here as another test to see if we can integrate them into the newshub, or use them for something else.

We arent posting everything we do in these dev diaries though! If you want to see more, to leave feedback or even to help out, join our Nomads Discord

The future of Dev diaries? Who knows!

Clearly, we arent posting these every week anymore. These diaries were intended to promote the nomads mod, and they have certainly done that. in the period between the first and last dev diaries, the number of nomads games played every day has tripled. Thanks to the newshub, this has continued to grow since then and now Nomads is more popular than ever! We even have an ultra fancy graph for you to check out:

You can see when we started these in late 2019, Nomads had about 50 replays per day, which went up to 150 per day near the end of the dev diaries. And then of course the news hub appeared and Nomads skyrocketed. In short, the mod is looking better than ever right now!

This does leave the question of what to do with these diaries, and we are going to look at various options. But that needs dev diaries that are nice and fresh, so here we are making one!

In the latest patch we have replaced the T1 static anti-air and PD models, and thought that it may be good to look through the process of how they got to where they got.

Way back in 2019 we made a plan of all the Nomads weapons, which units should have them, any variants and so on. This let us ensure that the faction has consistent technology and looks similar. In the same way that UEF anti air guns are all railguns, and the aeon use green lasers on all their gunships, we needed to have a list of weapons, their types and what they were used for.

This is quite an old picture, so you may find some interesting caveats in there, such as the t3 submarine no longer having a nuke at all! nonetheless the weapon types are accurate, and you can see that we are going for a theme with the nomads – they use lots of missiles and lots of projectiles, but practically no lasers, with the exception of the beamer. (which isnt really a laser!)

You can also see that the AA and the PD weapons are used on other units too, such as for secondary weapons, and for the T1 frigate. The first model for the AA was used on the T4 transport as a secondary weapon. It was originally supposed to be an AA weapon but got changed to anti ground part way through! Perhaps theyshould be replaced with the PD model in the far future?

The PD model itself took a lot more time to make after Armaster made the AA turret model, before it was finally put on the T1 frigate. From there it was put on the structure. The T1 frigate is still not finished at the time of writing this post, but the building is!

Since the other factions share the same base for their T1 defensive structures, we did the same thing. And because we already made the decision to use the same model or variants of it on different units, it meant we could develop the base separately to the turrets themselves. Marlo did the bulk of the work on that one, and luckily we didnt run into any significant issues with scaling the models. Very early on in the process we set out dimensions for what they should be, and thankfully we got them right! The weapons on the transport are exactly the same size as the ones on the building.

Making the base also took quite some time, and we tried many variants before we got something that looked right. We wanted the base to not be too entrenched in the ground if possible, since the Nomads are a mobile faction we wanted their structures to at least look like they could pack up and be moved around. Check out some of the early variants we tried. Can you see which bits were kept and which were discarded? 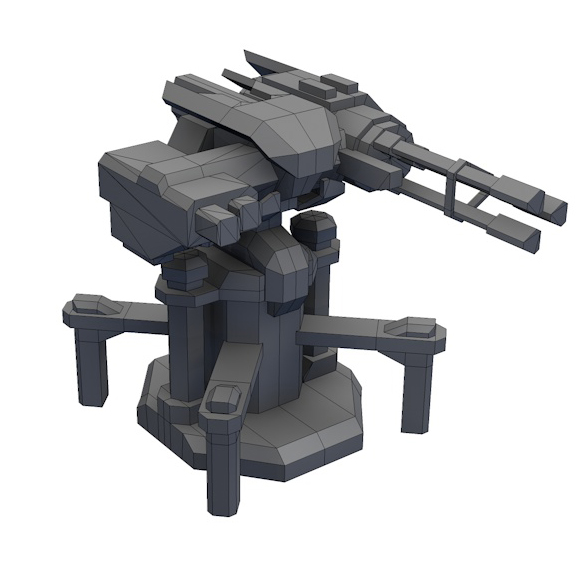 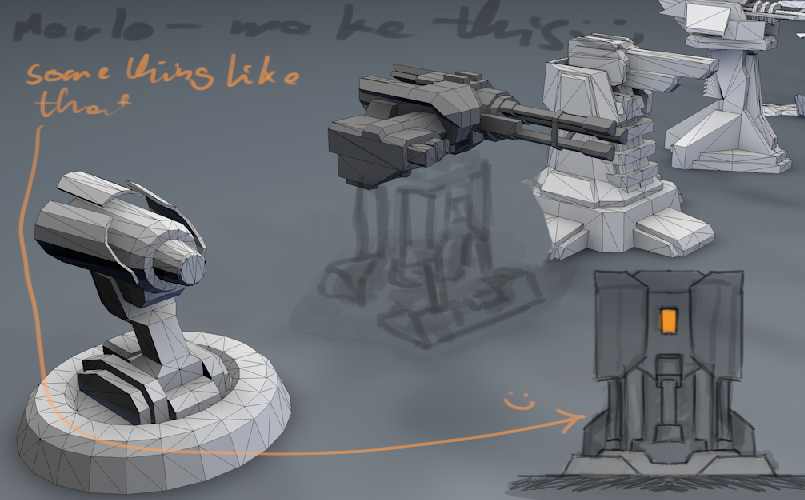 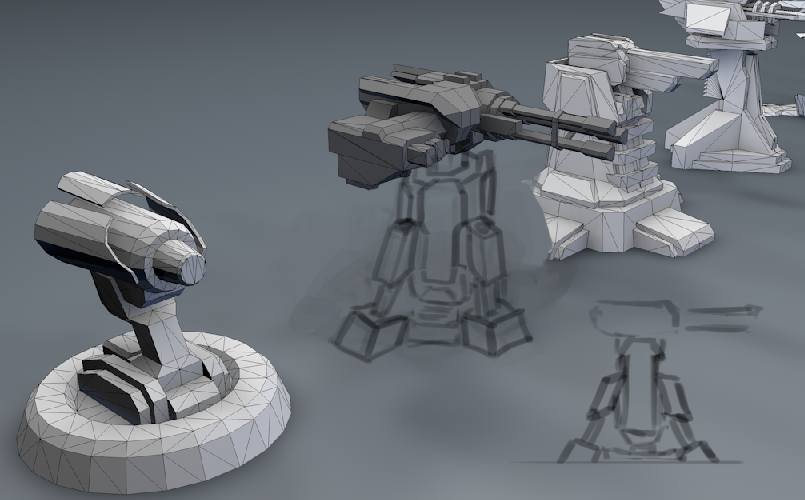 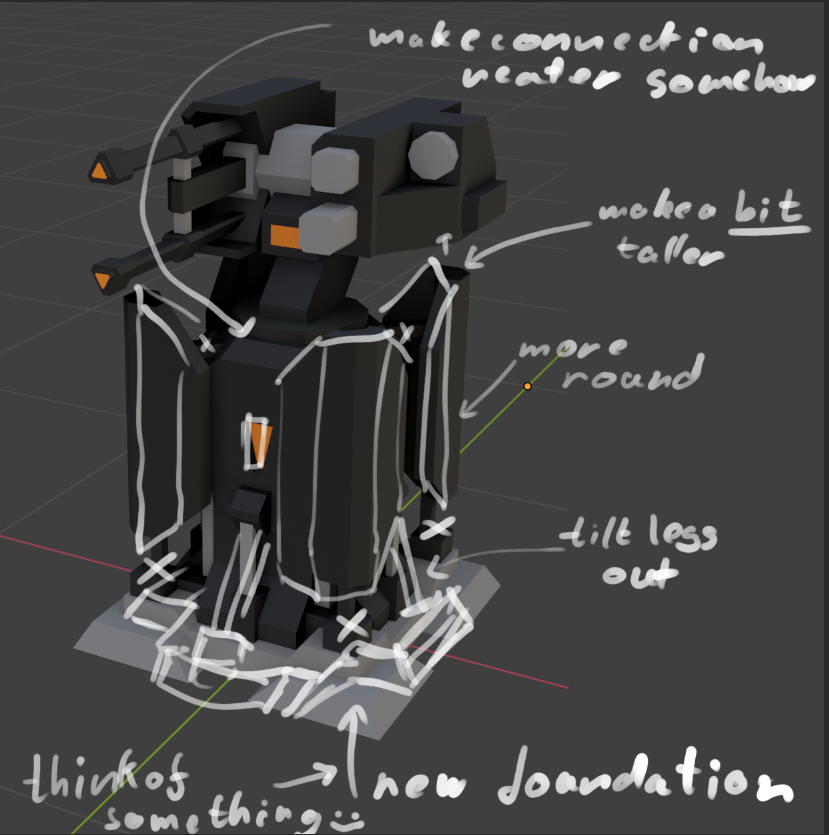 Finally we arrived at the completed model for the base, and it was a simple matter to then put the turrets on.

However what was interesting is that the base shares the textures! By using a little bit of magic with UV unwrapping, we were able to get the same texture to be used in two models. SInce the base of the turrets is the same, this lets us update the texture much easier and ensure that it is indeed the same all the time for them.

Below you can see that the model was in three parts, and on the right you can see the texture space. The stuff in orange is used by the base, while the gaps are filled with both of the turret types, on top of each other. Then each unit uses either one or the other turret, while the base is shared between them.

We did this by fully unwrapping the AA first, and then deleting the parts of the AA. After that we unwrapped the PD into the gaps left over. Then when texturing we linked the textures from one model to the other, and now if we ever tweak it all we need to do is just re-export all the textures and they will be updated on both units.

So. Which do you like more? the Anti-Air or the PD? Let us know!

And that was the dev diary for today. As mentioned above this is a small part of what happens on the Nomads discord, so if you want more, absolutely check it out. Even more important is your feedback on the mod, which we never have enough of, so if you have that, hop on as well!

Thanks for reading all the way down and see you next time, whenever that may be!

To leave feedback or even to help out, join our Nomads Discord