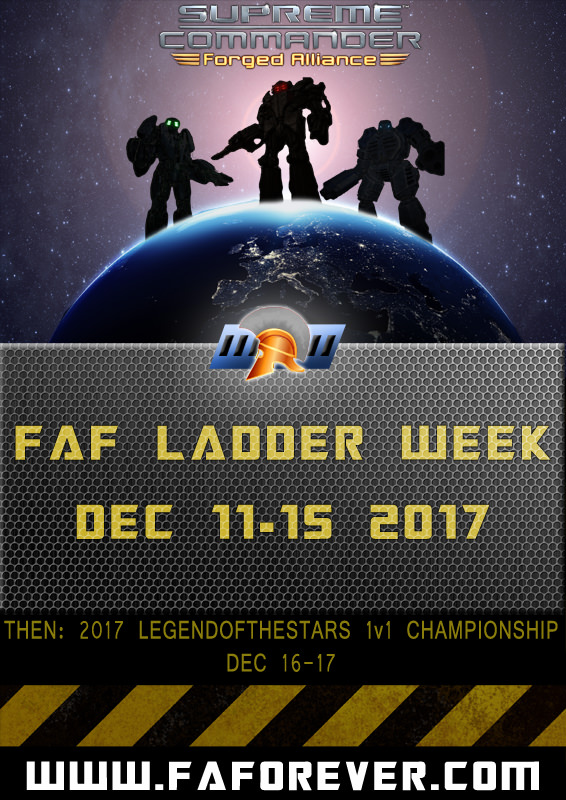 For those of you who have been waiting in anticipation for this tournament, it’s finally arrived! Arkitect has worked hard with his planning for this tournament and we’re finally ready to let the action unleash. Ladder week is starting today, and we would like to wish all of those who have signed up.

If you would like additional details, you can check out previous news posts about ladder week. Full details can be found on the forums here: http://forums.faforever.com/viewtopic.php?f=26&t=15474

Good luck to all of you!

-No more short/long term rotations
-(about) every month, the oldest maps in the pool will be replaced. Three 10×10, two 5×5 and one 20×20.
-The frequency and number of replacing maps might be adjusted if it is too fast.

Hi everyone. The next short term map rotation is online! In two weeks, half of the other maps will be replaced in the long term rotation, you can give your feedback on the forums. Until then, enjoy playing three new maps!

Its the end of the week and so the end of this endeavor. Over the course of this week we have seen a great increase in activity from high and low rated players alike, even a few games from players who were taking a break from FAF!

The man with the most points, the most games played, the DOMINATOR of the ladder, who will be GRANTED the ladder warrior avatar, is none other than BeastmodeGuNs!

With a grand total of 180 points, he came out on top after a grueling battle for first place, ahead by just 2 draws, with the winner being decided less than 10 minutes before the week ended!

The empire clan would like to thank everyone for participating; look forward to more events like this in the future. We have prepared some statistics for your amusement.

During this week we had:

– 53 participants who submitted at least one game, of which 35 had at least 5 wins

– members from 13 clans participated, of which 13 players were in the empire clan

This event was organized by the empire clan, with special thanks to HotFog and Norton.